BLDC fan or Brushless Direct Current Motor fan is a new innovation in the market. While comparing BLDC fan vs Normal fan, one must know that BLDC motor utilizes permanent magnets in place of conventional motors’ electromagnets and commutated electronically. The permanent magnets have lesser heat and energy losses in comparison to electromagnets.

BLDC motors can reduce power consumption by upto 65% compared to the usual induction motors. Again, a BLDC ceiling fan’s lifespan is more than a normal ceiling fan because the BLDC motor generates no heat and noise. So, it augments the longevity of the fan bearings. As a result, this alters the ceiling fans into modern appliances that can merge well with today’s smart homes.

In the fans industry, BLDC has become a new revolution. These fans are hugely utilized in industries that need high torque motors. In the coming years, it is expected that all inefficient and old induction motor fans will be substituted by super-efficient and smart BLDC fans.

So, lets dive into in-depth analysis of the comparative differences between BLDC and normal ceiling fans.

What Is A BLDC Fan?

BLDC fans are an integration of normal fans with the latest technology that gives superior performance and excellent results. BLDC motors convert electrical energy into mechanical energy by rotating the fan with higher efficiency than ordinary fan motors.

Due to the absence of brushes, the motor shaft does not create friction that eliminates the possibility of losing energy. Nowadays, several industries are manufacturing BLDC motors, and top companies use BLDC motors for their best ceiling fans available.

Like ordinary fans, BLDC fans are not available in many types. BLDC ceiling fans and stand fans are most popular and value for money though they are costly.

When Should You Choose A BLDC Fan Over A Normal Fan?

A normal fan contains a single-phase induction motor, but a BLDC fan uses a brushless electronic DC motor. The material utilized in the making and wiring these normal fans is inexpensive but not as efficient as BLDC fans.

On the contrary, the BLDC ceiling fan manufacturers utilize copper wiring. Compared to the standard fans that consume 70-80 W of electricity, the energy-efficient and modern BLDC fans use 20-35 W, nearly 65% less. Because brushless DC motors possess a higher torque to weight ratio, a BLDC fan turns into an energy-efficient choice for people.

Our Recommendations For BLDC Fan

If you prefer to buy a BLDC fan, look no further than the top 3 products- Atomberg Renesa, Orient Electric I-Tome, and Crompton Energion. The power consumption of these fans varies from 26 Watts to 35 Watts. Also, they rotate at 340-370 RPM speed, with the air delivery ranging from 220 CMM to 230 CMM. Overall, these BLDC ceiling fans are the best choices one can make. 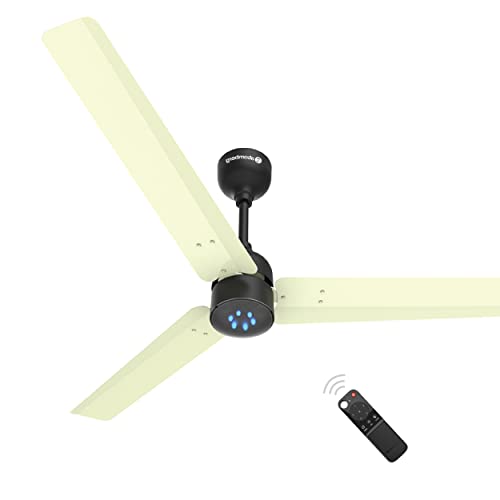 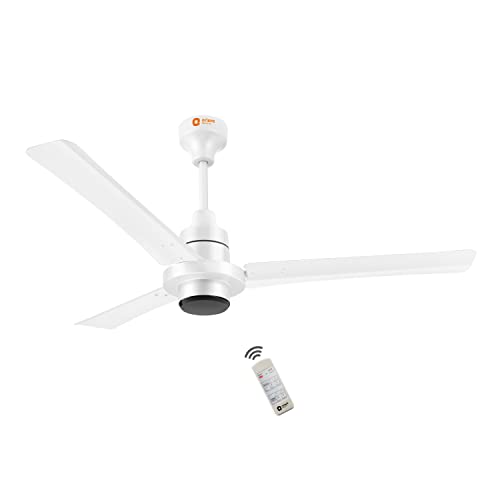 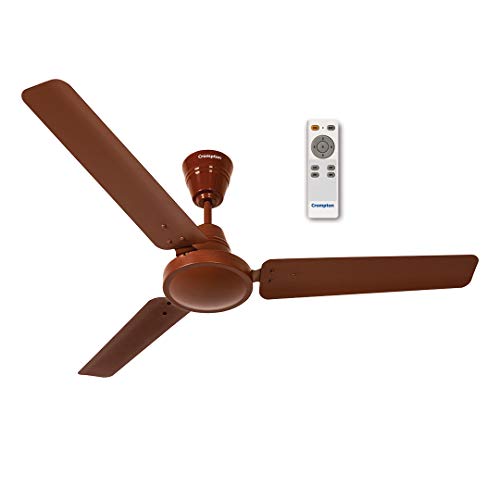 What Is A Normal Fan?

A normal fan is nothing but the ordinary fans with simple induction motors. The most important thing is an ordinary fan is used for general purposes and inexpensive. These fans provide a sufficient amount of comfort to people but generates noise and consumes more electricity.

So, it is vital to understand that such fans are ideal for regular use, and they must be in a well-maintained state to give a fresh breeze. Also, the doors and windows of the rooms must be airy and open for their optimum performance.

These fans are available in various designs- ceiling fans, table fans, pedestal fans, wall-mounted fans and exhaust fans. Each of these types of fans has different purposes in different conditions.

Advantages Of A Normal Fan

When Should You Choose A Normal Fan Over A BLDC Fan?

A normal fan is a more budget-friendly alternative to a BLDC fan. Many people choose regular fans over BLDC fans when they have financial constraints. Apart from it, fans with normal induction motors are also available in various designs, which BLDC fans lack of. So, if you have any of these requirements, you can choose a normal fan over a BLDC fan.

Our Recommendations For normal Fan

If you choose to buy a normal fan, these top 3 products are the best choices- Havells Nicola, Crompton Hill Briz, and Usha Racer. The power consumption of these fans varies from 74 Watts to 78 Watts. Also, they rotate at 370-400 RPM speed, with the air delivery ranging from 205 CMM to 220 CMM. Therefore, these fans are the best choices in the category of normal fans. 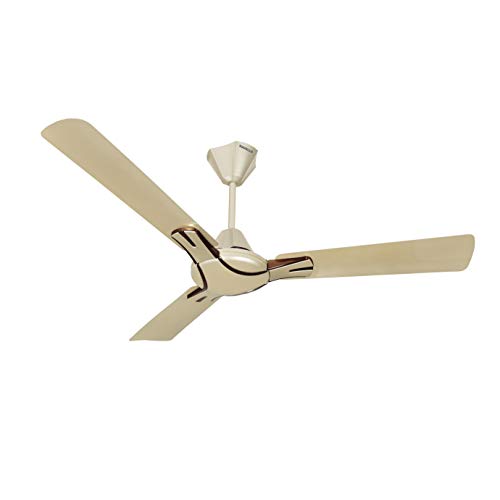 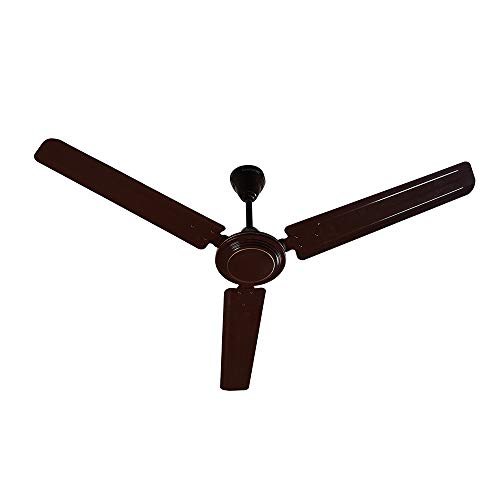 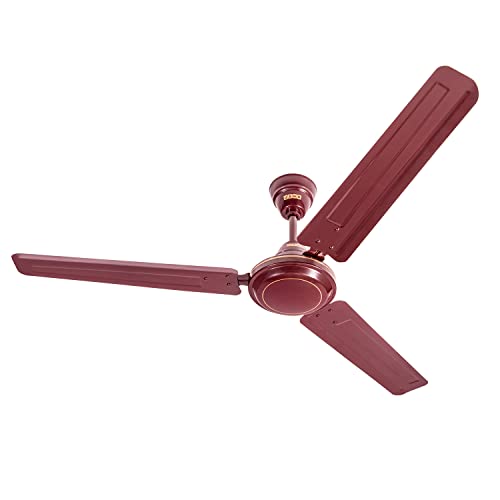 Differences And Similarities Of BLDC And Normal Fan

BLDC fans are equipped with brushless DC (BLDC) motors. Without mechanical brushes, these motors have a higher power-to-weight and torque ratio. Additionally, they run efficiently in comparison to the brushed DC motors. There isn’t any friction loss of rotational energy in BLDC fans, so they deliver higher efficiency over an induction motor.

The BLDC fans use 20-35 Watts of power for running. Utilization of permanent magnet and brushless mechanism in BLDC motors results in lower power consumption. However, the power requirements of BLDC fans tend to change, and when there is a lesser speed, it results in lower energy consumption too. These fans even consume less energy than air coolers too.

For example, the Atomberg Renesa BLDC Ceiling Fan has a rated power of 28 Watts. If you use the fan for 18 hours a day, it will consume 0.5 kWh of energy. If the electricity tariff is ₹6/unit, this ceiling fan will cost you bills of only ₹90 a month.

On the other hand, normal fans use an induction motor, and they consume 70-75 Watts of electricity for operating normally. However, this energy requirement remains constant when operating it at different speeds.

* The electricity tariff is considered as ₹6/unit and run time as 18 hours.

The above table shows details of power consumption, electricity cost and monetary savings of using the two fans. If you buy Atomberg Renesa, you can recover the differences in their costs after 13 months and save ₹1772 second year onwards.

So, compared to the BLDC fan’s electricity bill, the cost of running a normal fan is almost thrice. For this reason, installing a BLDC fan is always preferable.

A BLDC fan provides a longer back-up on inverters as it draws less electricity. BLDC fans run on DC motors and thus have got inbuilt inverter to change AC supply to DC. For this reason, you can also use it in a solar-connected system.

You can run any normal fan with a 150 Watts inverter, but as these fans draw more electricity than BLDC fans, the power backup would be slightly less. Whether you have a table fan, ceiling fan, wall fan, or a pedestal fan, you will not require too much power.

To compare the speed of BLDC and normal fans, you must know that the duty cycle of a constant PWM (pulse-width modulation) signal controls the speed of a BLDC fan. It is applied to the outer switching device. When you amplify the percentage of the PWM signal’s duty cycle, you can increase the speed of your fan.

On the other hand, controlling a normal fan’s speed is as straightforward as you just need to switch it on and use the regulator to adjust the rotational speed. However, some modern ceiling fans also come with remote control systems.

The air throw of most BLDC fans is satisfactory, whereas you have to trust specific brands and products in the case of normal fans.

A BLDC fan has the sturdiest motors, allowing silent and smooth operation. These fans run at higher RPM with almost zero noise because the BLDC motor does not contain brushes. A well-tuned BLDC fan is considered the most energy-efficient and noiseless fan available.

On the other hand, the nose level of ordinary fans range from 30-70 dB(A) based on the model. Due to this reason, big fans are installed in the unused or isolated rooms. Nonetheless, improvements related to noise reduction are made by using superior designs.

Which fan is more affordable?

Fans with BLDC motors are costlier than ordinary fans. The minimum cost of BLDC fans starts at nearly ₹2000, whereas a normal fan costs at least ₹800. For this reason, if you are looking for a budget-friendly solution, a normal fan is a better choice.

BLDC Fan Vs Normal Fan – Which Is Better And Why?

While most of us utilize normal fans during scorching summers, fans with BLDC motors are still new in the market. Built with BLDC and ordinary induction motors, BLDC fans and normal fans primarily differ in air delivery, affordability and power consumption.

Some other remarkable benefits that you can get from buying a BLDC fan are greater torque, increased reliability, longer lifetime, and, indeed, low noise. So, a BLDC fan scores better than a normal fan in terms of technology, speed, power consumption, lifespan, and different other parameters.

On the other hand, a normal fan is more budget-friendly and available with a lot more designs than BLDC fans. However, considering overall features, benefits, and limitations, it is evident that BLDC fans are a better choice than normal fans.

Founded in 2019, Homeplace is a popular portal from India showcasing different types of home and kitchen appliances. Be it induction cooktop, gas stove, kitchen chimney, dishwasher or any kind of cookware, follow the expert tips, trustworthy guides and recommendations by Homeplace.